I have been playing Bridge for about 35 years (as at 2005), and it has been a most rewarding experience. It is like being a member of a giant club, where you automatically belong no matter where you are geographically. The bar at Lakeside in January (Canberra, Australia) for the National Open Teams is a melting pot of players from all over Australia, with a regular and substantial crowd from New Zealand. Other players come from Indonesia, the USA, the UK and Europe. We had the awesome Polish and Italian teams in the same year once.

This page will show some interesting hands, occasionally discuss system, and now and then look at some of the mathematics of Bridge.

This is the second hand in today's article. 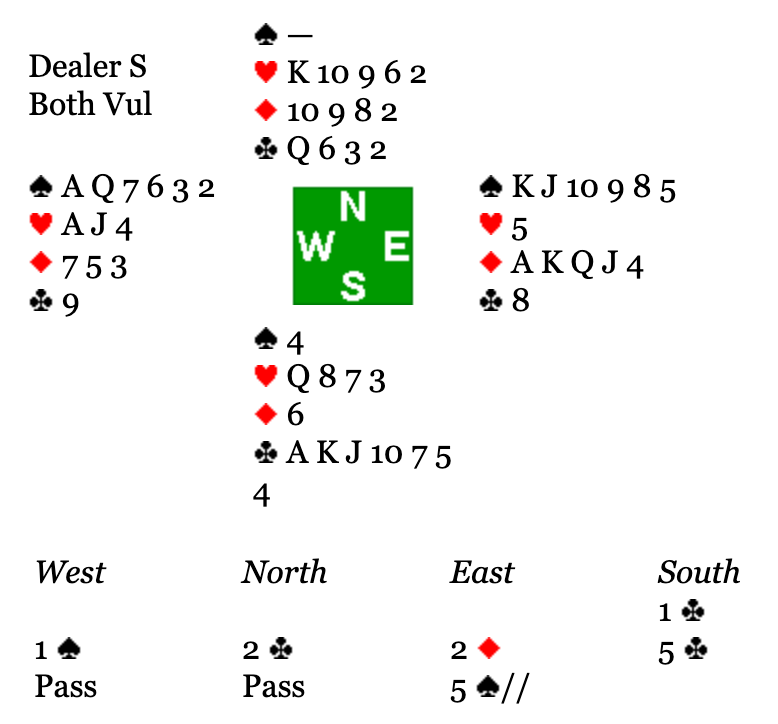 It was suggested that South's jump to 5

removed the bidding space required to explore for the EW Spade slam.

doesn't get close to conveying the enormous strength of the hand for play in a Spade contract. Surely 4

is a more descriptive and should get the hands to the right level.

But what about North's first bid? He/she/it suppresses a 5-card Heart suit to raise Clubs?

Isn't the hand almost perfect for competition? Say North doubles, or in a fit of youthful verve makes a fit-showing jump with 3

. Then the auction takes an entirely different turn. Both sides now have a huge double fit and have to dance a delicate waltz - EW can make 6

but NS are only two down in 7

(my opponents always get the trunps right). A small bidding misjudgmemt has the potential to swing an enormous number of imps here.

The last word should go to Michael Ware (New Zealand) who asked what was wrong with Blackwood at East's first turn? Then bid 5, 6 or 7S depending on the response.

This is exhibit one. 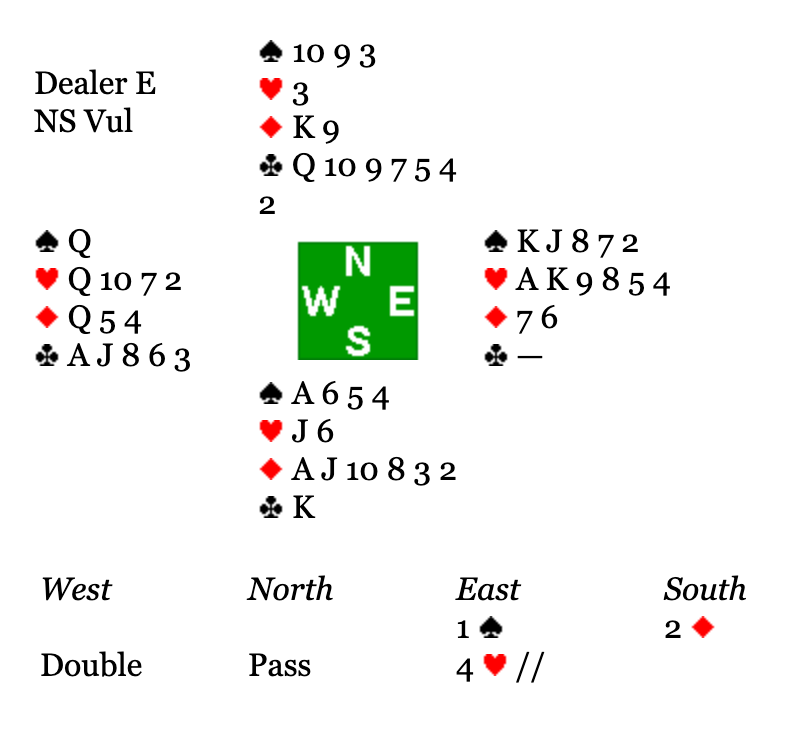 We see this (East) hand in text books every day, but how often does it crop up in practice? I mean, really, how weird is it to open your 5-card Spade suit (as recommended in most books) , hear a Diamond overcall from lefty, and get to bid a comfortable 4

opposite partner's negative double? I must be a clean living boy.

This is exhibit two. 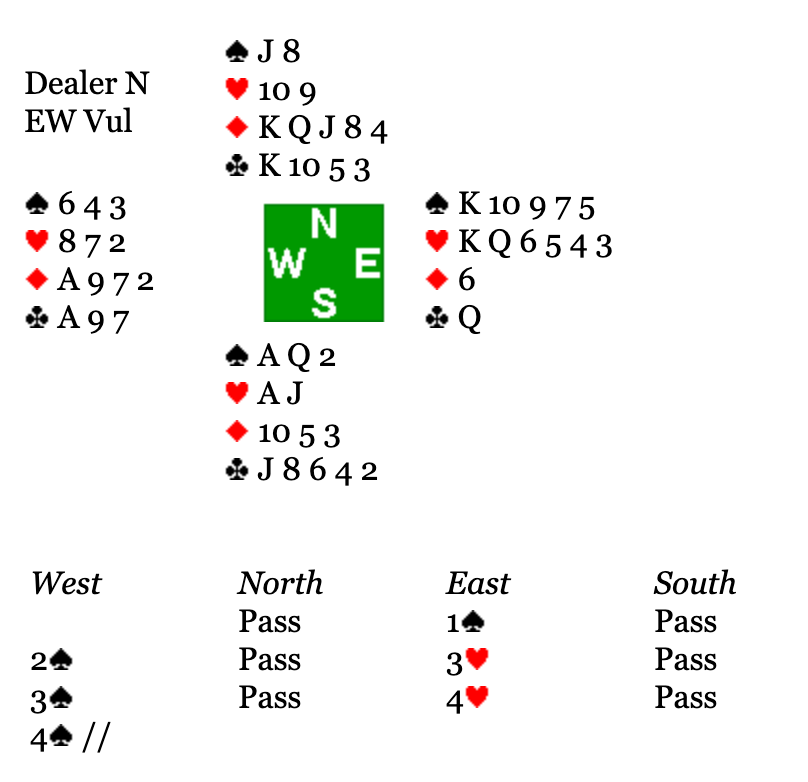 This is the companion hand. 2

was partner being disciplined and not getting excited with his two Aces. 4

basically over-ruled partner and was a confirmation of "natural". Given the favourable Spade/Heart layout this rolled home as well.

This is exhibit three. 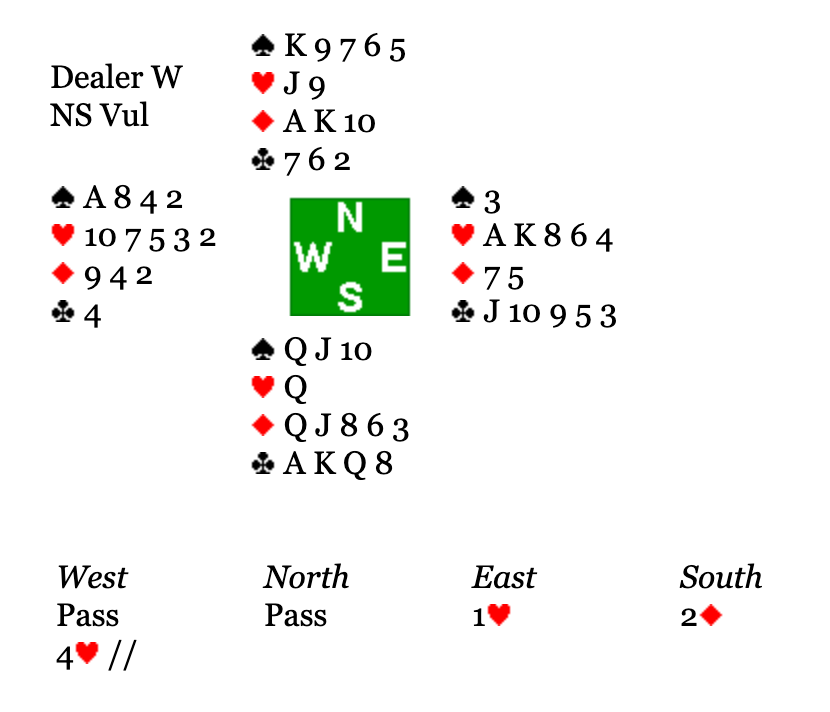 Another curious hand. NS were robbed.

Given Bill Jacob's article in the last newsletter, clearly S has to follow up her 2

Can North get involved over 4

is automatic. If South overcalled 2

fit North has to do something. But what? We can all see that 4

is a doddle, but if we bid it is it clear we are assuming partner has suppport otherwise please correct to 5

Only my opponents always get these decisions right.

The lighter side of Bridge

We (Charlie Snashall and myself) were playing against Mike Hughes and Ted Griffin, playing for the NSW Seniors. Ted and Mike had been a tad optimistic with a couple of slams they bid and which duly failed, one of which must have been exceedingly painful. They failed in a grand only to discover that their Victorian counterparts hadn't bid past game.

Now it was our turn to fall from grace.

This is Deal 8 from Match 3 of the first round robin. 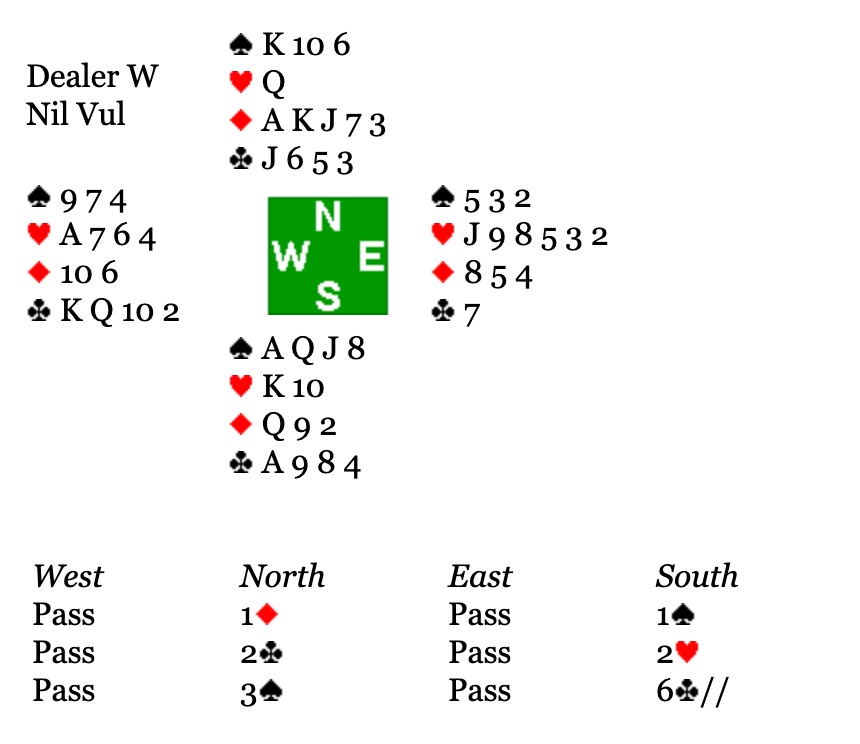 bid rounded out his shape. This showed a good hand as he could have given a fast raise on the 2nd round of bidding. I thought it showed a better hand than it actually was, (the

Mike Hughes (correctly in my view) didn't double. I explained that Charlie had a good hand with a Heart shortage, either 3154 or 3064.

After we had gone the obvious two down, I suggested that I must have been on a different planet. Ted put his hand on my shoulder, smiled and said “It's crowded up there!”

This is Max Henbest, the son of Simon Henbest and Cathy Lachman. He is nearly 14 and is a most amiable fellow. Caddying at the Victor Champion Cup on the 2005 Queen's Birthday weekend, he was repeatedly summoned to bring boards to Ziggy Konig and Jimmy Wallis, well known for the speed of their play. And, unusually for them, they were playing well down the field.

On one of his visits to the table, Ziggy enquired as to what he needed to do to get a good-looking caddy. The response was wonderful — “Try playing at Table 1!”