I have a large collection of odd-ball dictionaries, and books dealing with the (sometimes very strange) history of English. And I get sent a lot of amusing stuff like the first article on Life in the 1500s.

The plan is to put up the bits and pieces I find particularly amusing. Stop me being the sole arbiter of drollery and email me with any suggestions!

A true story. I was leaving a cinema many years ago (1991) having watched Mel Gibson in Zeffirelli's version of Hamlet. A man in front of me asked his wife how had she enjoyed the film? Her response was, 'strewth†, “It was good, but full of cliches”. I've been accused of making this up, but I swear it's true.

Every now and then you see something truly wonderful. I was in a taxi in Sydney heading to the airport to come home to Melbourne. Passing through Redfern, there was a building site where a terrace house had been demolished, leaving an enormous canvas for the graffiti artists to exploit.

And underneath, someone had added this spark of genius — "But does he like Tabbouleh?" 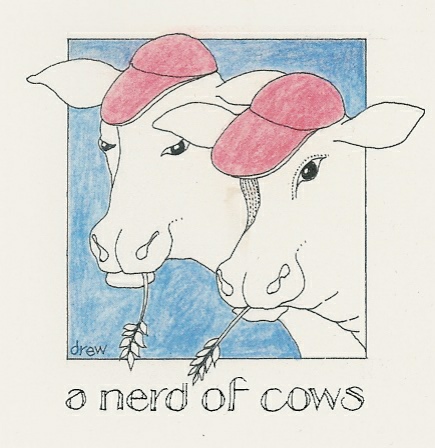 I was going to include the modest collection I had garnered over the years, but while checking them, using the Dictionary and of course Google, I came across A Beastly Garden of Wordy Delights by Melissa Kaplan. This document lists the animal, its plural, the collective noun, the sound they make, male and female names where appropriate and the name of the offspring.

She also has animal adjectives, such as lupine/wolf, asinine/ass, and other bits of trivia like:

Did you know a line (or queue, generally of schoolchildren), usually paired, is called a crocodile?
As in, "The crocodile made its way down the sidewalk, the crowds parting to let it pass."